About The Black Shroud 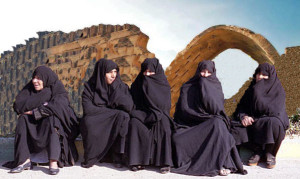 The Black Shroud is a long poem – an operetta – written by Mirzadeh Eshghi, an Iranian poet, journalist and freedom fighter, in the early 20th Century, depicting the repression of Moslem women.  This poem and works of many other writers and poets were the reflection of a national argument that had started at the time for women’s liberation and their place in society, an argument that still continues today, although at a different level.

The title refers to the mandatory head to toe cover, -hejab, called by various names and styles: Burqa in Afghanistan, Niqab and Abaya in many Arab countries, Purdah in Pakistan, and Chador in Iran – which Moslem women are forced to wear in public.  They were – and still are – predominantly black.

Moslems bury their dead in a white shroud, and the poet is analogizing the Chador to a shroud in black, in which the Moslem women are condemned to live, as if they are already dead and waiting to be buried.